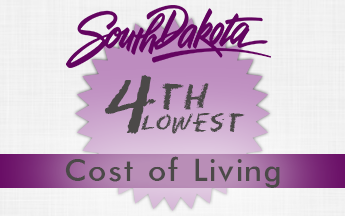 The Bureau of Economic Analysis recently released the 2014 Real Personal Income for States and Metropolitan Areas which includes the Regional Price Parities (RPP), a cost of living measure, for all 50 states. South Dakota continues to have one of the lowest costs of living in the nation, ranking 4th, with a cost index that is 88% of the national average.

Since the inception of the regional price parities, South Dakota has consistently ranked among those states with the lowest cost of living with our RPP hovering within the mid to upper 80’s. 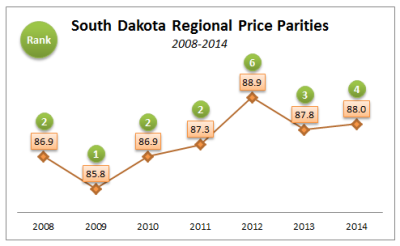 In 2014, the states with the lowest RPP included:

And those states with the highest RPP included:

The Regional Price Parities for all 50 States & D.C. are as follows:

If you’d like to learn more about Regional Price Parities, the BEA has extensive working papers exploring the different aspects and methodologies of RPP.

OR, if you have a specific question about RPP and don’t feel like wading through the riveting reading available to you at the BEA, leave a comment below and we’ll doggy paddle through those murky depths for you.

Like Loading...
‹ Incentives | The Work Opportunity Tax Credit for Rural Renewal Counties
EDC Survey Stats: How does your community compare? ›